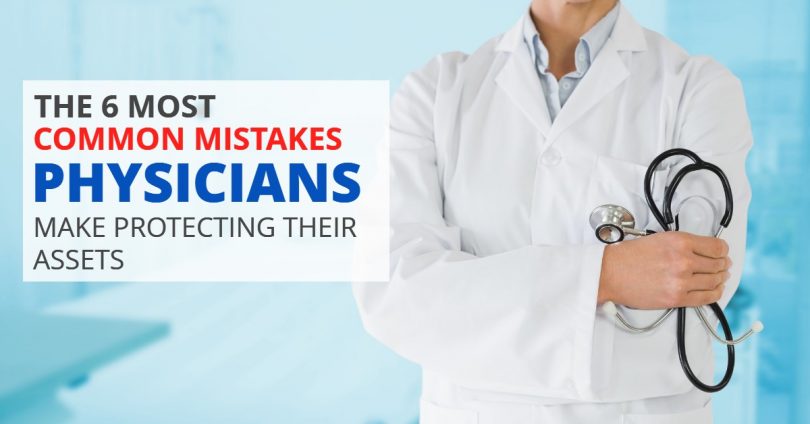 You worked hard to get where you are! The thought of losing it all to a malpractice or accident leads to many sleepless nights (or should).

1. Not Having Enough Umbrella Liability Insurance

Not having enough liability insurance is crazy. Every physician should have a large “umbrella liability” insurance policy. These policies pick up after your underlying homeowner’s and auto policies end in terms of liability.  Most of our clients have 2-5 million dollars of coverage at a cost of $400-$1200 a year. That’s cheap.

In many states (especially my own, Florida), assets owned by a married couple can be titled “as tenants by the entireties.” This titling implies that each of the couple owns the “entire” asset.  So, if either is sued individually, the other spouse can claim that the sued spouse has no real interest in the asset. This works very well in the right states. Conversely, I’ve seen several physicians put all their assets into their non-physician spouse’s name to avoid malpractice lawsuit exposure. Unfortunately, now the asset is exposed to all kinds of the spouse’s creditors and with no inherent protection. Again, in many states, assets owned by both of a married couple can’t be taken by any lawsuit against either of the spouses.

3. Assets in Living Trusts Are Not Protected by Creditors

Another mistake commonly made is believing that assets in a Living Trust are somehow protected from creditors.  Living Trusts are created during your lifetime to hold assets that can then pass without probate at death. They used to help segregate assets to maximize estate tax savings, but this feature is no longer necessary.  In any event, a Living Trust is “revocable”, i.e. it can have assets move in and out of the trust at the whim of the “grantor” (the person forming the trust). Since you can move assets in and out of your living trust, a judge can also compel you to do so to pay off a creditor.  Only Irrevocable trusts provide asset protection. These are usually trusts that hold inherited money — they are now irrevocable as the grantor is dead. As long as you are not the sole trustee of the trust, you probably have excellent asset protection.

There is a movement toward “self-settled” irrevocable trusts in some states-meaning that you can form your own irrevocable trust to protect your own assets.  The jury is out on how well they will work as there has been little litigation against these vehicles. A major worry is that a demand for funds from a state court (in which you are sued and which does not recognize self-settled trusts) to another (where your trust exists) will be honored as a matter of state-state cooperation.

Understand that 401k and defined benefit plans are protected by Federal law from creditors.  However, protection of IRAs (Roth and Traditional) are governed by state law. Federal protection (usually bankruptcy) extends to any size IRA that contains only rollover qualified retirement funds but has a 1 million dollar limit on traditional IRA assets.  Mixing the two types of IRAs may expose assets unnecessarily. You should find out how your state treats these vehicles, especially before rolling over a large pension plan into an IRA. Inherited IRAs are also only protected in some states, so keep this in mind if you plan to either leave a large IRA to someone in an “unprotected” state, or expect an inherited IRA while you live in such a state. For example, in Florida, Inherited IRAs are granted the same strong protection from creditors as are regular and Roth IRAs.

5. Leaving Assets to Your Heirs

There are many ways to protect assets you leave your heirs.  Trusts with at least one trustee that is not the beneficiary and the absence of mandatory distributions are a good start.  Leaving such assets in trust also protects a future ex-spouse from taking some of the money you left for your child. There are also ways to provide for a second spouse while protecting assets after they pass for your children from the first marriage.

6. Get Your Name Off the Title of Things You Can’t Control

A major asset protection mistake I commonly see is when a physician owns at least part of something out of their control.  Commonly, I see adult children of physicians who still have their parent’s name on a car title. Guess who gets included in a lawsuit triggered by the adult child’s driving?  We also see high liability vehicles like snowmobiles, jet skis, and boats either co-owned with other families or used by “friends”. Again, guess who gets sued when something bad happens?

In 2007, God got Fred’s attention by almost taking his life due to a disease called Ulcerative Colitis, which resulted in a botched surgery and ruptured intestine. After that near-death experience, 6 surgeries and 8 months off work, Fred decided to completely change his law practice to an area where he could truly help people. He left the stressful pace of litigation and went to work for a small boutique firm that focused on Estate Planning and Elder Law in El Paso, Texas.